What is there to say about Kelsey Johnson? We doubt it is even possible to fit her entire personality into a single biography, but we will try to give you a glance into the life of Kelsey. Kelsey is currently a park 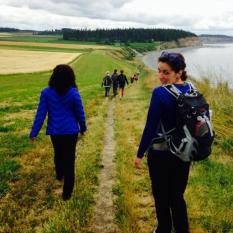 ranger at Klondike Gold Rush National Historical Park, but more importantly, she is one of the founders of In My Backyard as well as our (the interns’) supervisor. Kelsey has worked for the National Park Service for more than a decade at many parks including Olympic National Park, Oregon Caves National Monument and Mesa Verde National Park. She got her start through the a NPS student program and was stationed at San Juan Island National Historical Park. While there, she worked for the park service as a writer and, consequently, realized that she did not want to be a journalist despite her undergraduate degree in the subject (she later received her Master of Science in Resource Management). When asked why she remained with the park service, Kelsey replied that when working with the National Park Service you get to, “travel to some of the most beautiful locations in America and the world.”