This summer has been an adventure and a learning experience. As an avid hiker, spending my summer exploring and researching National Parks and other natural and cultural sites in Washington is a dream come true. I was not only fortunate enough to travel to multiple parks and sites in Washington State, but also gain a thorough understanding of the opportunities available for youth in the Evergreen State (most of which I did not know about when I was a “youth” myself). Although the number of opportunities that were available at parks and cultural sites amazed me, I realized that there are several components that hinder middle and high school-age students from accessing these opportunities.

END_OF_DOCUMENT_TOKEN_TO_BE_REPLACED 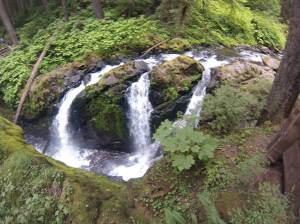 After getting an early start on the third day of our Olympic National Park trip, we headed to the Olympic National Park Visitor Center to meet with Dean Butterworth, the Outreach and Education Specialist at Olympic National Park. Believe it or not, Dean started as a  volunteer at Golden Gate National Recreation Area in 1998. He eventually made his was way to Olympic in 2008. Dean clearly enjoys engaging with youth and he had a lot to say about the opportunities for youth in the area.

END_OF_DOCUMENT_TOKEN_TO_BE_REPLACED

While at Olympic National Park with the In My Backyard team, Jimi (our graduate student intern from the Univ

ersity of Washington) and I hiked the Sol Duc Falls trail. Being only .8 miles one way, the trail is quite short. However, once you reach the falls, there are other trails you can continue onto if you desire a longer hike. The Sol Duc Falls trail is relatively flat and short, but it is still beautiful. Throughout the hike we even stumbled upon several small creeks and waterfalls before reaching the bigger falls. Despite being a popular and at times crowded trail, the tall trees and moss covered everything help make the trail feel secluded and small. While on it, you feel as though you are in the heart of the wilderness, when in reality you are super close to the parking lot.

END_OF_DOCUMENT_TOKEN_TO_BE_REPLACED

During our four-day trip to Olympic National Park, the In My Backyard Team headed to the Elwha River. Beforehand, we, the SCA interns had put together some research to share with the group about the history of the Elwha, the construction of the dam, and finally the dam removal which is scheduled to conclude in September 2014.

To give you some background information, the Elwha is a 45-mile river on the Olympic Peninsula, intersecting the beautiful Olympic National Park. The river flows north to the Strait of Juan de Fuca. In 2012, the Elwha River dams, which had directly caused a dramatic decline in the salmon population, began to be removed.

END_OF_DOCUMENT_TOKEN_TO_BE_REPLACED

Olympic National Park is composed of a varied set of environs, everything from verdant green rainforests to coastal beaches to jagged mountain peaks. The Staircase area of the park, in the southeastern corner, is one that I am quite familiar with having lived there for a month while working on a trail crew. Perhaps my residence there makes me biased, but I can attest that the Staircase area is one of the most beautiful areas of the park.