The youth program A Place at the Park (APAP) is a summer internship opportunity for youth that partners with college mentors from another program: In My Backyard (IMBY) and entailed many aspects and subject matter relating to the National Park Service.

The internship was brought attention to me by a good friend whom share the same interests in outdoor programming as I do: Robert (Bob) Warner, who directed me to an interview with the program director of APAP: Allison Burdick and with the same level of passion for outdoor programming did I get involved with the internship. The internship is a ten week long program starting in June and ending in August. Every week would have a set subject relating to many things that the National Park Service itself advocates for. I imagined diving into different historical importance of parks and their existence. But now its given me a different perspective of what the parks stand for and why they need more diversity in the service. 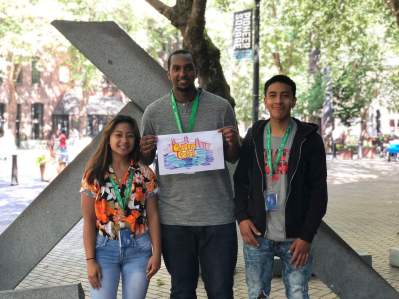 One of the many things I learned include, dissecting the National Park Service logo which is symbolic to the importance of the services. I liked how one of the aspects of the symbol incorporated history and “protecting cultural and historical resources” – the arrowhead. From this lesson, I realized that National Parks aren’t just outdoor and natural spaces, there are facilities and designated buildings that are also National Parks but aren’t accredited to like the building in which we stand: Klondike Gold Rush National Park, because they aren’t in the mold of being historically prevalent or massive in structure, in comparison to the more visited sites in the US such as Yosemite, Grand Canyon or Yellowstone. I never expected a building like the Cadillac Hotel (the museum that once was) to be a National Park, but it is. The building just like every other building in Pioneer Square gives opportunity to expose the history and the making of Seattle as a young city. It also gives a voice to the National Parks Service whilst in the city environment. I give this importance because I want to be able to break out of the thought that National Parks are only specific to monumental/ outdoor escapes. This national park gave me a sense of belonging, a sense of community and a different lens to the services and for future interns, they should know this too.

One thing I would change about the program is the final project process. I along with the other interns likely agree that this was the most challenging part of the program. The challenge is interesting because we weren’t given an idea of how far we can go- creatively. The project was introduced early on in the program and though it was advised to plan it over the courses there was a bit of overlap considering we were still diving into other topics of the program. I liked how we had liberty to choose our own projects as long as it was related to the national parks, but at the same time I wish we could’ve collaborated with other interns as well for a better understanding of teamwork. As of right now though, I’ve enjoyed having to think creatively and that being gave this program a whole lot more meaning and makes me interested in other programs that the National Parks have to offer like IMBY.

In My Backyard (IMBY) sounds like an interesting college internship. I like many aspects of it including taking a leadership role and mentoring youth into different elements of the National Parks Service, I’m interested in the program and likely will apply for an internship next summer. My IMBY mentors were very kind, spirited and great leaders, I thank everyone of them for giving us interns guidance in our projects. Shout-out to Aron for being my designated mentor, I appreciate your support!

In many words, the program was a delight to be a part of. I don’t have many changes to the program considering all aspects was organized, welcoming and fit the mold of expectations. Honestly I was intrigued by the paid internship aspect for the program but being in it gave more reasons to come in every Tuesdays and Thursdays, despite the amount of other things I had to do. So I thank Bob and Allison for helping me get connected to this program because I enjoyed every moment of it all. Thanks to my mentors from IMBY and also the other high school interns for making the program worthwhile. It made my summer after high school a more productive and memorable summer, 10:10 definitely would recommend to other high schoolers to join in next summer.