For many,
the words “wild” and “wilderness” have preconceived associations with a particular type of environment – nature. Typically, when the “wild” is referenced, nature is what the conversation revolves around. The Wild is thought of as a primitive biome, uncontrolled and uninfluenced by humans, where only naturally occurring elements of the world can be found. It is a place where humans can visit, but cannot inhabit or own. It is a place solely owned and chiefly governed by the Earth.

This is a popular outlook of the Wild that is primarily propagated by Westernized cultures. With the conception of Westernization came the conception of term “wild”. Western culture was birthed between humans and nature, and as Westernization grew, it slowly brought these two apart. Eventually a dichotomy was formed between them, and now they are viewed as two separate things. Westernized humans came to live in environments that are civilized, controlled and predictable; the Wild came to be an environment that is thought of as uncivilized, uncontrolled, and unpredictable.

Though the Wild as a natural place is the most popular definition, it is not the only one. One facet of the Wild that is often not explored is the concept of the Wild as an experience. Through this lens, the Wild is not tangible, and it is not concrete. As a place, the Wild has manifest qualities and properties – properties that you can see and touch, such as the trees of a forest or the sand of a desert. As an experience, however, the Wild has no physical

Think of the Wild as more of an emotion. It is confined to the realm of thought, as emotions are. Like emotions, it cannot be seen, smelt, heard, or tasted – it can, however, be felt inwardly. It can only be accessed as a response to an outside experience. It has more fluidity, just as some experiences can make you feel happier than other experiences. It comes and goes with new experiences.

You can experience the Wild anywhere. For many, they feel the most wild when they immerse themselves in nature. When they visit those parts of the world that remain disconnected from and uninfluenced by human interaction, they feel reconnected with something within themselves. There was some sort of emotional deficiency within them that was rejuvenated. 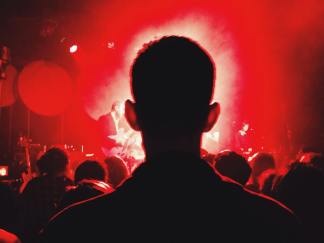 Marcus Aurelius once said that “Nature is the nature of all things that are; things that are have a union with all things from the beginning.” Experiencing and practicing the Wild actualizes this union between all things. For me, I feel that union at its strongest when I’m immersed in my own personal element – live music. Whether I am on stage playing or in the crowd watching, I feel a sense of rejuvenation. When I am at a show, and surrounded by people that are all there for the same unifying purpose, I feel a shared energy between us. An electricity is generated that courses throughout the crowd. It is a primitive, uncontrolled current. It’s a feeling that tells me that there is something bigger than myself, something that connects all of us together.

Experiencing the wild means your element becomes your own personal wilderness. It reconnects you to what we define as “nature” and “wilderness”, which has been pried apart from the human experience through the course of history. Whatever makes you feel the most natural, or whatever you feel the most natural by doing, brings you back to that essential, natural connection. It draws you back to where we came from – the wild.