It’s throwback Thursday, and what better way to spend it than with short story about one of my first hiking experiences!

I am much in favor of the notion that every aspiring hiker, wanting to start a successful career of visiting the most pristine and untouched wilderness that our world has to offer (with minimal loss of life/limb/sanity), must begin with less grandiose, shorter adventures. This allows for practice of sound decision making while out on the trail, rather than paying dearly for such poor decisions in the middle of a hundred-mile journey. Ranking high on my list of sound decisions would be remaining on established paths while witnessing said pristine wilderness, no matter how tempting it is to run off in any given direction in search of undiscovered treasures that nature has in store.

There is a trail in my hometown of Newcastle, WA, where Cougar Mountain’s Western-most limit meets the creeping development of the suburbs. Newcastle was founded in the late 1800’s as a coal-mining town, but was not incorporated by King County until 1994, almost 30 years after the coal mine shut down for good. Sparse remnants of the infrastructure left behind by the coal mining business litter the stream, while abandoned mining shafts and railroad tracks just off the path make for a part historical, part nature walk on the Red Town trail. Having lived in Newcastle my whole life but never exploring the history in my own backyard, I decided that this was THE day to start hiking, for no real reason in particular. And oh, my friend should come along too, since I hadn’t seen him in over a year. We had given ourselves a few hours to walk the length of the trail, reach the waterfall at the end, and take the same way back.

Most of our hike was at a lazy pace, and the many artifacts along the trail stopped us. There was an old boardwalk put over the stream that we took upon ourselves to walk along until returning to the trail, and I had the great idea of separating from my friend to climb up the side of the waterfall at the last quarter mile of the trail, and reconvening where the trail ended. I eventually found him an hour later, after getting nearly lost and wading along the creek that led up to the waterfall, cutting through a few backyards, and walking on the roadside to get back to the trail. Having had our fair share (or so we thought) of off-trail shenanigans, we decided that we were either going to get completely lost on the way back, or not lost at all. So we decided to walk on the roads in the same direction that the trail went until we could figure out a way back to my car.

Feeling far too pedestrian to continue shuffling along on the pavement and eventually discovering, to our horror, that we would have to walk all the way around the forest to get back to my car, 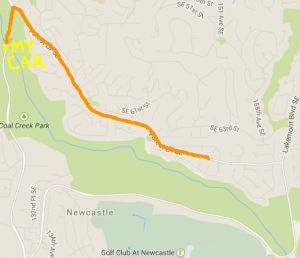 we decided to cut our losses, somehow bushwhack our way back through the woods and across the stream to get back down to the trail, and then walk along it back to the car

Well, our half-cocked plan was much easier said than done. After getting through a thicket of blackberries, we were reduced to sliding on our rear ends on all sorts of thorns and poison ivy since the ravine was so steep. After fighting our way for over an hour to get down to the stream, which should have been right next to the trail, our supposed express-route back to civilization (and food), we couldn’t find any sign of the trail we had been hiking on a few hours before. Too afraid to search for the trail lest we get turned around and wander around hopelessly, we decided that our safest option would be to wade down the stream, all the way back to the car. We discovered an old social trail, on its’ way to being reclaimed by the forest, that zigzagged back and forth across the stream, giving us brief respites of immersion in the stream bed.

Luckily, we survived the ordeal.

Sometimes we think back with nostalgia to my first experiences in the woods, reminding myself of the humility we felt when our half-baked plans fell apart, or the sense of wonder and security we felt, in the woods so close to our home. Sometimes it’s just the reminder I need when I need that little extra self-motivation to reach a campsite after a long day of hiking.