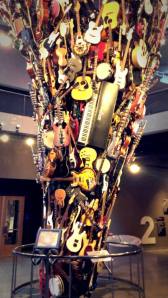 This Thursday we, the interns of this project, went to Experience Music Project (EMP). Though some of us had not been to EMP before, I had visited the museum about a year ago and was very excited to go again. The EMP really is an experience. The building itself is designed in such an interesting way that if the museum had no exhibits people could still be entertained simply looking at the interior. However, the exhibits in the museum are extremely impressive as well.

One of the exhibits that is currently being displayed at EMP is the “Nirvana: Taking Punk to the Masses.” This exhibit detailed the rise and fall of the legendary band Nirvana as well as the grunge/punk movement and the evolution of the music scene in the Pacific Northwest. I consider myself to be a casual Nirvana fan, having only listened to their most popular songs, but I still found the exhibit to be particularly intriguing. The creation of the grunge/punk music scene in the Pacific Northwest was particularly fascinating. Another exhibit worth checking out is the “Block by Block: Inventing Amazing Architecture” exhibit. This exhibit was filled with Lego recreations of famous skyscrapers. “Hear My Train a Comin’: Hendrix Hits London” is another super cool exhibit that has costumes and newspaper articles from Hendrix’s career. The PG-13 “Can’t Look Away: the Lure of Horror Film” exhibit is quite entertaining. The exhibit has props and costumes from horror films, as well as videos with various directors discussing specific horror films. If you have a flair for the dramatic, there is a sound proof scream booth where you can be photographed giving your best horror movie scream.

Being a bit of nerd, my favorite exhibits at the EMP are in the SciFi section. “Icons of Science Fiction” was very fun to experience. The exhibit is full of props, costumes and set pieces from science fiction movies and TV shows. For example, there is a Dalek from Doctor Who and Neo’s robe from the Matrix on display. (I am a huge Doctor Who fan and who doesn’t love Keanu Reeves?) This exhibit also displays many influential science fiction novels that have now been added to my must read list. There is also a section of this exhibit where you can direct, star in and produce your own science fiction film. My all-time favorite exhibit I explored at EMP was the “Fantasy: Worlds of Myth and Magic” exhibit. Stepping into this exhibit is similar to stepping into another world. After opening a large engraved wooden door, you are instantly transported to a forest. Pine needles cover the floor and the walls are painted to appear as trees. The exhibit has props, costumes, set pieces from famous fant

asy movies and television shows and early drafts of famous fantasy novels. As you move through the exhibit, the scenery changes from a forest, to a castle with an interactive dragon, to an odd metallic tree cave. It is truly immersive. The exhibit also has many touch screen computers with interactive games and more information. This exhibit is simply incredible. My only criticism would be that the exhibit needed more Lord of the Rings artifacts, but they just recently added some! Now, museum goers will be able to see props like the sword “Sting” that was carried by both Frodo and Bilbo Baggins.

Overall the museum is very fun to wander through. We spent a couple hours just walking through every exhibit. The Experience Music Project has fewer opportunities to get involved while on a budget, however, it offers a couple of great options. Teens ages 13-19 can sign up for the free TeenTix pass which allows you to purchase $5 tickets on the day of visiting. EMP participates in this wonderful program. Also, EMP has partnered with the Seattle Public Library to make free museum passes available to check out at http://www.libraryinsight.net/mpbymuseum.asp?jx=y9. Many other museums participate in this program as well. Finally, for teens who are passionate about music and want to become more involved in the museum there is a youth advisory board. The board meets bimonthly for six months and works with the museum to develop youth programs. The board also organizes the Sound Off! 21 & under battle of the band’s which is held in March. Applications can be found on EMP’s website. If you are curious about the Seattle music scene check out The Sound Board on Facebook https://m.facebook.com/TheSoundboard?_rdr.