Today the interns ventured out of downtown Seattle to visit the Museum of History and Industry (MOHAI) in its new location in South Lake Union. We were greeted by the fashionable Adult Public Programs Assistant and Education Coordinator who gave us a tour of the museum and also had a lot to tell us about the programs for teens, some which are very recent, that are available at the museum.

One of the highlights of our tour was the entertaining and hilarious Great Seattle Fire musical production. Apparently it’s been called a mix of Monty Python and Ken Burns. In the museum you can also find several interactive games such as a quiz that determines which neighborhood you belong in in Seattle and a quiz which sees if you could get a job at Microsoft. We were very intrigued by the Chocolate Exhibit, which not only told us about the history of chocolate but also exuded a chocolate smell, making our mouths water. We also learned that the Chocolate Exhibit is the first fully bilingual exhibit at the MOHAI (available in English and Spanish). This may be something to consider if you have relatives that speak little or no English.

Fortunately for Seattle teens,Teen Tix can also be used at the MOHAI.  If you are 14 and under, admission is actually free! Today we also learned that the MOHAI has a Youth Advisors program, aimed towards teens between the ages of 13 and 19. This six 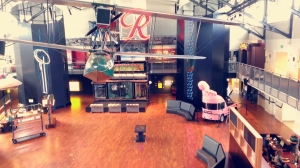 -month program offers the opportunityfor teens to plan events and make recommendations on how to make the museum more inviting for teens and also rewards teens with a stipend. The application process is in the fall so look out for it if you’re interested! The MOHAI also has a volunteer docent program called the MOHAI Gallery Ambassadors program. If you are an outgoing person who has a passion for Seattle history and would like to share it with the public, definitely consider applying for this position!
Here are a few other events that are coming up. Many of them are free or have discounted prices!